It may have taken a while, but we are truly living through an exciting time when it comes to the representation of bi+ characters in our media. As a bi male, I literally can’t move for people telling me to watch Crazy Ex-Girlfriend for a character called Darryl Whitefeather. (No, I haven’t seen it. Yes, I’ve watched the song on YouTube. Yes, it’s very good. Ok?)

Whether it’s Broad City, Big Mouth, The Good Place, The Good wife or the imaginatively titled The Bisexual, it is safe to say that onscreen sexuality has never been more fluid.

However, for all the attention a character like that gets, another bi+ icon in waiting slips under the radar. So here’s a celebration of some characters that are definitely (read: probably) bisexual, but have yet to get the acknowledgement they truly deserve.

Hardly lacking in acknowledgement, but worth pointing out all the same. It may have been lost amidst all the (justified) hyperventilating over ‘Hot Priest,’ but the lead character in THE WORLD’S BEST TELEVISION SHOW EVER TM is in fact bisexual.

This fact was confirmed in the second series when Phoebe Waller-Bridge’s confused, amoral and hilarious heroine shares a kiss with Kristen Scott Thomas after declaring that she was ‘not strictly’ a lesbian. However, keen eyed bi-viewers should have suspected as much all along.

Back in the very first episode of series one Fleabag invites a drunk woman she meets on the street back home with her. A terrible decision born out of the character’s existential angst? Absolutely. But still further proof of a fluid sexuality.

Fleabag has come to represent so many of us lost, sad, adventurous and misguided urbanites. But in addition to being the patron saint of the untogether, she deserves a special place in the hearts of the bi+ audience.

Killing Even is a VERY bisexual series. (PWB- are you trying to tell us something? God I hope so.) Much has been discussed about the central bisexual love/hate/shoot/stab romance between spy Eve Polastri and couture psychopath assassin Villanelle. But in reality, are they healthy bi role models?

Eve’s romantic obsession leads her to destroy her home life and almost her career, whilst Villanelle…well she kills people for money but mainly for fun. A lot. Don’t get me wrong these characters are a joy to watch, and I’d forgive Villanelle anything for a single one of her costumes but…

Spare a thought for Bill Pargrave.

Eve’s onetime superior at MI5, Bill (as played by David Haig) is a rare thing; a sympathetic boss, magnanimous when demoted to Eve’s employee, and a sexually fluid middle aged gentleman.

On assignment in Berlin (where it sounds like he spent one hell of a decade in the 80’s) Bill reveals himself to be so much more complex than the staid authority/father figure he could have been written as in less capable hands. His touching description of his relationship with his wife, making it clear he loves her and finds her attractive, and his comfort disclosing the ‘hundreds’ of men he has loved in the past, make him a truly inspired bi character.

The revelation is a surprise to Eve- and the audience- but is delivered so nonchalantly by Haig that it becomes a truly punch the air moment. Or at least it did in my household.

Call Me By Your Name- Elio + Oliver

Ok, stick with me here. It can be argued that one of the 21st Century’s most popular same-sex love stories doesn’t actually feature a single gay character. Whilst this feels sacrilegious to write, there is actually ample evidence that the protagonists of Andre Aciman’s coming of age tale, Elio and Oliver (played by Timothee Chalamet and Armie Hammer in the 2017 film adaptation) are both bisexual.

Indeed, the film’s final revelation that Oliver is to marry a woman back in the USA is all the more bittersweet thanks to the fact that the audience realise there is no realistic way for him to reconcile his twin desires. The love between Elio and Oliver is all the more devastating because it was doomed to be brief from the very first moment.

Author Andre Aciman is also a bit of a bi-representation legend. (Check out his excellent 2018 novel Enigma Variations if you want to read fluid sexuality depicted with zero fuss or fanfare.)

In CMBYN literary sequel Find Me, released in 2019, Elio and Oliver’s stories are picked up more than a decade later, and it is confirmed that Elio has had relationships with both men and women over the intervening years (although nothing that compares to his summer with Oliver- swoon!)

And in perhaps the most cherished passage of writing from the original novel, Elio’s happily married father confesses to having once had a similar relationship but not being brave enough to act upon it. Totally bi! (I’m not crying. You’re crying.)

He was reptilian, charming, amoral and hugely entertaining. And bisexual. Married (albeit slightly begrudgingly) twice, father to one child, but conducting an illicit affair with Ben Whishaw’s naïve Norman Scott.

When things go wrong, Jeremy is aided in the cover up by best friend Peter Bessel, seen across the drama both confessing to also being ‘musical’ and in a sexual relationship with a woman. And eventually Norman Scott ends up married!

Are any of these men healthy bi role models? Good god no! But as a depiction of bisexuality at the heart of the British establishment, this drama was essential viewing for bi+ people. Even if it’s just to wipe our brows and thank Fleabag that things have gotten better since the 70’s!

Cinemas most famous hetero lothario has a bi-side. In Skyfall (2012) whilst tied to a chair by a pansexual Javier Bardem, Bond replies re the novelty of said situation “what makes you think it’s my first time.”

Cue excited giggle from the villian (and, let’s be honest, much of the audience.)

Ok, maybe this one is stretching it a bit, but a boy can dream, right? And with (honorary bisexual- surely?) PWB contributing to the script for Daniel Craig’s next adventure, maybe 007 will start taking his martinis both shaken and stirred? Now that would be progress! 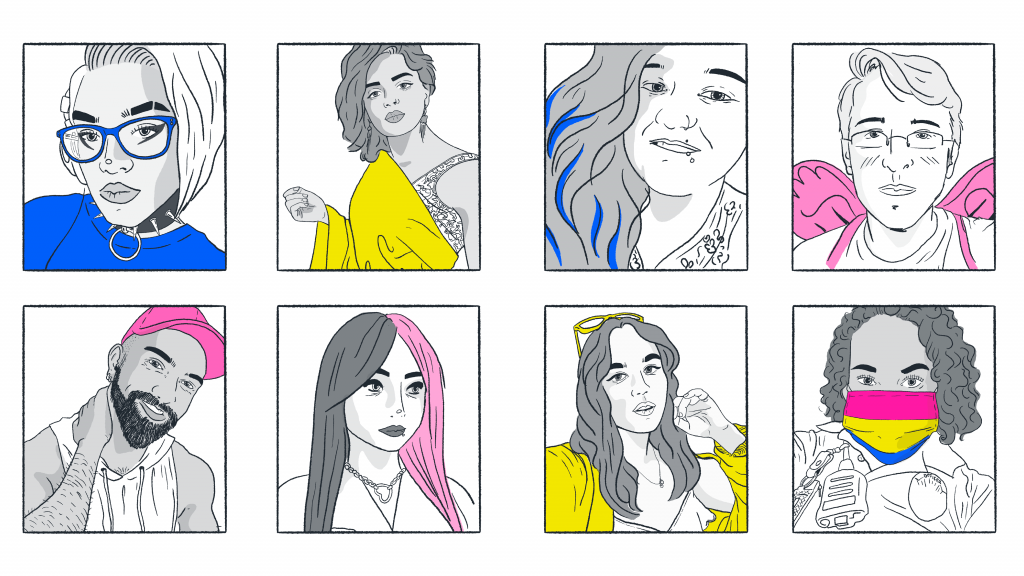 Unicorn chats to proud pan folks from all around the globe