Q – Tell us a bit about the work you create?

I struggle with this question. I guess loads of people do. When I talk about the variety of things that I get up to sometimes it sounds like a bit of a mess! But it’s all held together by a real interest in the ‘usefulness’ of art. Especially, what the wider social and civic uses of art are. But within that, a really wild odd variety of things.

I do other kinds of research and performance work, but it all goes under the banner of ‘social practice’ or ‘socially engaged art.’

Q – Could you define what ‘social practice’ or ‘socially engaged art’ means to you?

Art with people. That feels like the simplest way of putting it. I like to work collaboratively with a definite focus on non-hierarchy and trying to get away from the idea of the artist as this sort of tortured genius. I really hate that idea.

and trying to get away from the idea that there are certain people and institutions that are art.

You recently did a project in (now infamous) Barnard Castle?

Yes! The now famous Barnard Castle. I grew up just down the road from there, so I had been to that museum (The Bowes Museum) a lot as a child.

Your website describes your work at the Bowes Museum as ‘queering the space.’ Could you explain what you mean by this and what took place there?

There were ten artists commissioned as part of the #Untitled10 2019 project. Each one was highlighting a different aspect of the Bowes collection. When I applied to take part I wondered how well my ideas of an exploration of LGBTQ+ history would go down there, because in many ways it’s a very traditional museum. But, happily, the staff were just wonderfully brilliantly supportive of it.

It’s a museum that actually has so much queer history already in it,

and yet no one had particularly focused on that before.

The Museum was built by a couple, and one of them was an actress in Paris before they got married and set up the collection. During that period she played these ‘breeches’ roles which are like drag king roles- women dress as men and playing male characters-  but there’s nothing in the museum that talks about that!

Also, they have this great big huge silver statue of Sappho- a 5th BC Century Greek bisexual poet- and yet there was almost no intepretation written about her by the museum, and what was there was so coy, really skirting round her sexuality.

So, already knowing the museum and having known it for years, I thought it was  important to bring out those stories that I had never seen explicitly talked about.

‘Queering the space’ is also something quite structural

– it’s not just about exposing hidden stories. It’s also about thinking how institutions can be more queer; how can they welcome people who identify as queer, and how they can be queer in the sense of using queering as a process. As a process of being more open and making less assumptions about the world. How can we get people to think differently about what this space is and how it can be welcoming to a big variety of people and stories?

Q – In your experience of audiences and the public, have you found that fluidity- of sexuality and gender- is becoming more accepted?

Well..hmmm. Yes and no, as is the answer to so many questions!

Definitely, within the time that I have been working there is generally more openness to fluidity and non binary-ness; I mean that in the sense of philosophically and ethically, etc. But unfortunately as a foil to that, the opposite is also happening. Although amongst a lot more people there is an increasing feeling of flexibility, and nuance and not making assumptions, there is also a massive movement and body of people who are reacting against that, in often very violent and dangerous ways.

I’m lucky because I mostly only have experience of people who are becoming more and more open and accepting, but I don’t want the fact that that’s my personal experience to cloud my resolve to challenge the opposite of that. I think that’s really important.

Q – Do you think that art is one of the ways in which people can become more accepting of difference?

Again…I dedicate my entire professional life to the idea that art can change things, so of course there’s a massive part of me that will say ‘yes’ to that question.

But then, there’s also a massive part of me that knows the majority of people who engage with work I’ve been involved in making are people who are probably pretty accepting. Who are already interested in exploring a variety of different stories and looking at things from other people’s point of view. Not exclusively, and I don’t want to make any blanket statements.

I think it’s very important to be aware of that and to keep interrogating my reasons for and methods of making art alongside people. Asking “how can I take this art that we make and that I think is important and get people involved who wouldn’t necessarily think it was for them, or that it was interesting or even know it was happening.”

It’s really vital to keep thinking about where the art is going, who’s being allowed to have access to it, and what can we all do to widen that and make it more accessible.

Q – Is there a museum or gallery that you would particularly like to ‘queer’?

I’m super lucky because the museum that I really wanted to do that to was the Bowes! Because I grew up going there and didn’t see some of my experiences reflected in the collection, but I loved it…

I’d really like to have a go at queering some castles.

Why? Because they’re so masculine aren’t they?

These big lumps of stone full of these virile fighting men and all that courtly love stuff…I just think there’s so much interesting fun stuff to be done with that. So a castle, I don’t know which one though?!

Q – This issue’s theme is ‘Crush;’ can you tell us about your first crush?

I was educated at home, so I guess for quite a lot longer than other people I didn’t really realise that not everybody was bi. That was my experience of the world, and it just didn’t occur to me that that might not be the way other people experienced the world.

I remember having this overwhelming crush on Jesus. Jesus, that was this girl, playing a boy…there’s loads going on there!

Q – So there wasn’t a moment when you realised you were bi, it was more realising that the whole world wasn’t bi?

That’s exactly it! It was a really shocking thing to discover. Not only that the world wasn’t all bi, but that people had really negative views of sexuality. I just hadn’t really thought about it or experienced it until I was really quite old because I wasn’t going to school.

When I started going to school for one lesson a week- I think I was about 12- and overheard a conversation where people were just being really nasty about (someone with) a same sex crush and it was a real “oh god” moment.

I had realised that there were people in the world who thought that way, but I never thought I was actually going to meet any of them. It was really shocking and very scary. Then for a long time I didn’t really talk about it. It took quite a while to get back to the point when I felt that it was part of me and it was fine.

Q – What have you got lined up for the rest of the year?

I’ve got an experimental project about how we do social practice when we’re not allowed to see each other.

For somebody who is obsessed with people- from a work point of view and in every other way- it’s really complicated to think about how my practice might work without being able to actually physically spend time with people.

Just to play around with the possibilities and see if any of that lovely, juicy social stuff that happens when people are actually together

can happen when you can’t be physically close to one another. I think it’s really worth exploring.

People love to say that this situation (the pandemic) is ‘unprecedented’, and of course, in a way they’re absolutely right. But also, loads of people spend most of their life living like this. There are loads of disabled people who mostly interact in this way. I was very ill for a long time and I couldn’t get out of the house and I interacted with people through social media etc.

I just want to mention some historical bis.

We would LOVE that.

So… Sappho. (5th Century BC Greek Poet.) Definitely, who I mentioned before (as a statue in the Bowes collection.)

Because she lived such a long time ago and because the only contemporary record of her is her own writing. So there’s no contemporary writing about her. If you just look at her words

and they’re addressed to men and women. I reckon that’s pretty bi!

If people want to know more about her and just experience her words there’s a great account on twitter called ‘SapphoBot’ which publishes a quote from her every two hours. I’d recommend that to everybody who is interested in getting a bit of Sappho in their lives.

Also, I’m in Newcastle, and we still have a bit of Hadrian’s wall still going through the city here. Hadrian was a Roman Emperor and he had male and female lovers.

I believe that one of his male lovers died and he was so heartbroken that he memorialised him by building a city in Egypt in his honour. Like you do, if you’re emperor and you’re dead sad that your boyfriend has died. I love that story.

(N.B. Hadrian’s BF was called Antinous and the city built in his honour was Antinoöpolis.)

That’s how you do it.

Lady Kitt is currently a member of two groups who are working to advocate for and support disbaled artists:  UK Disability Arts Alliance #WeShalNotBeRemoved  and Disconsortia

There will be an online exhibition in July and there’s currently an open call out to disabled artists to be part of the exhibition; here 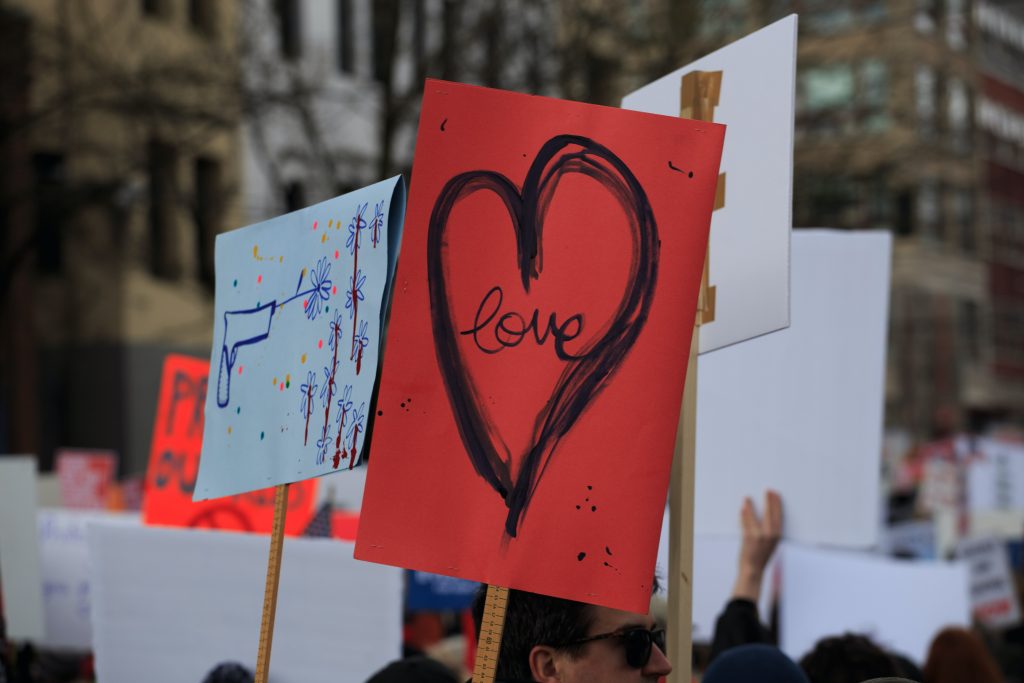 Issue 4 – Letter from the Founder & Editor

Lev and Lucy talk about making our Crush issue 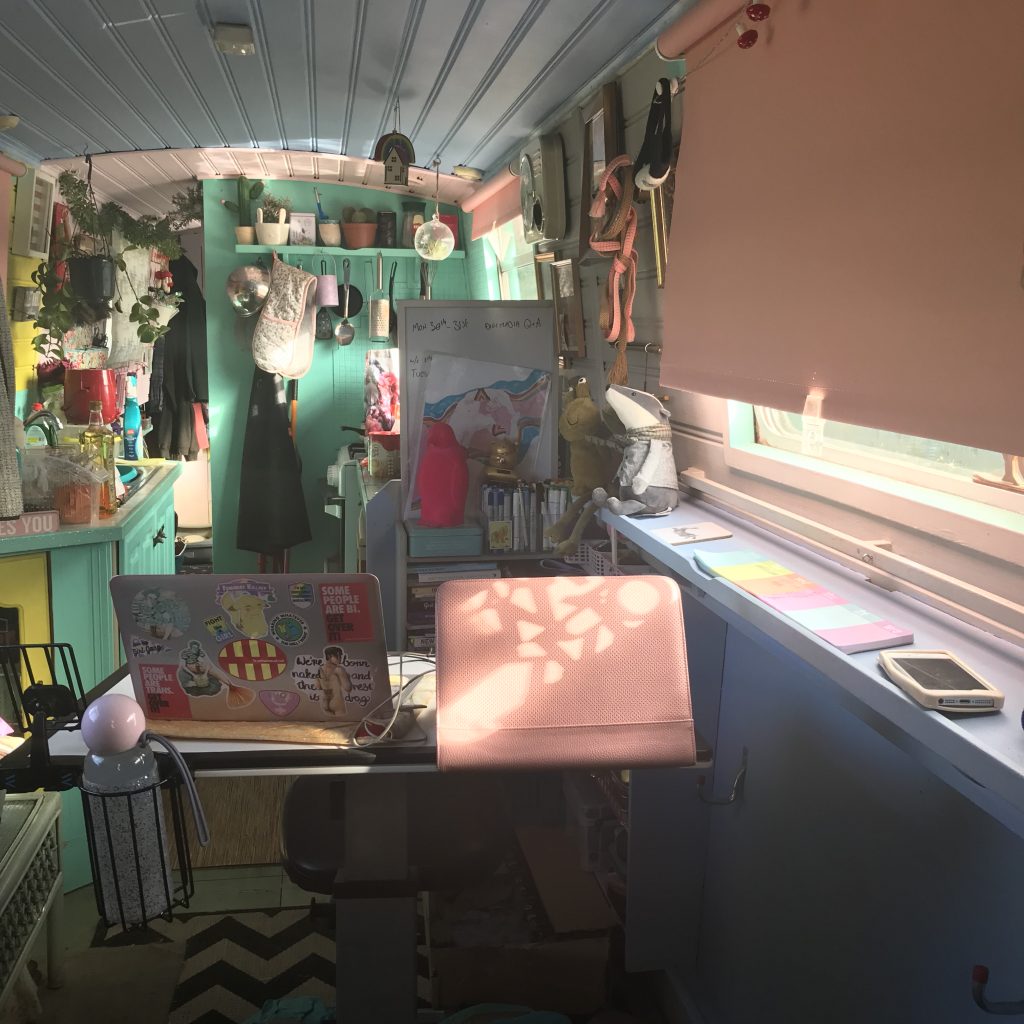 Writing novels, reminiscing about crushes and living the houseboat dream 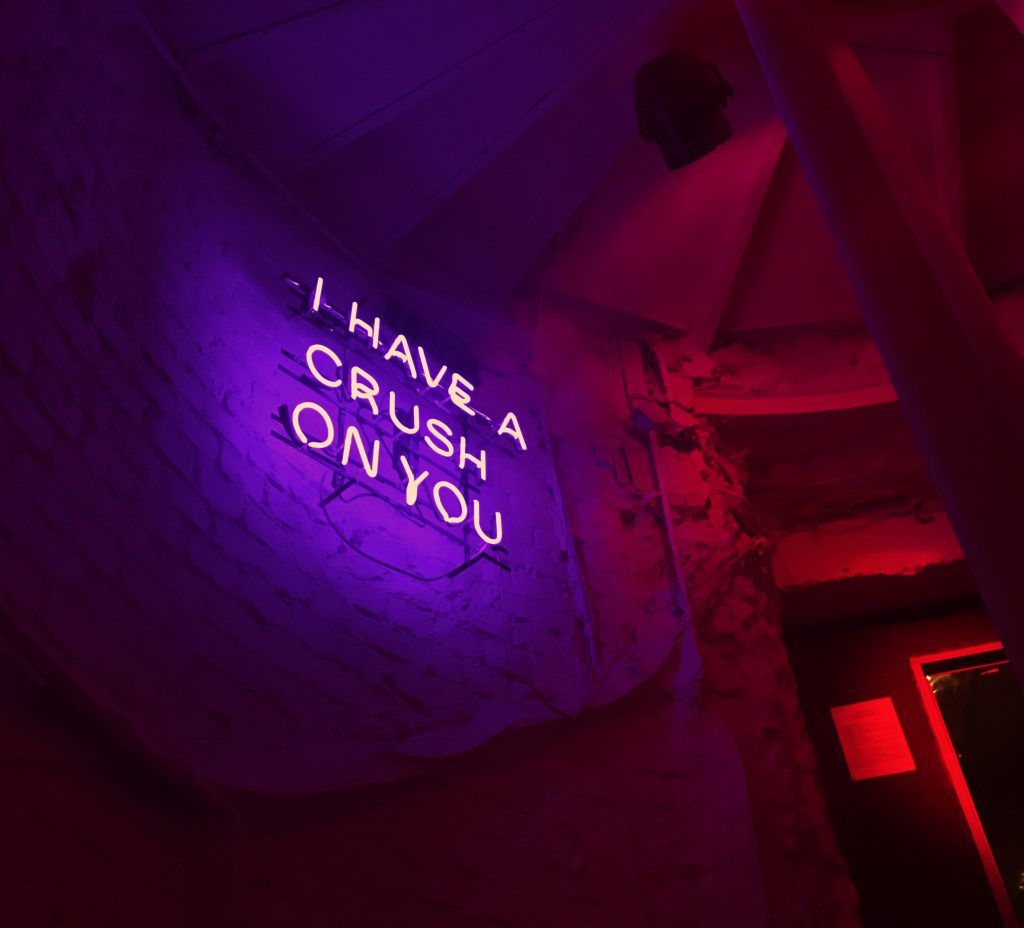